So last Sunday the my family and I took a trip up to Philadelphia to see my niece. She has been putting herself through college at Temple (in engineering no less) and wanted to show us around. She took us to Love park. 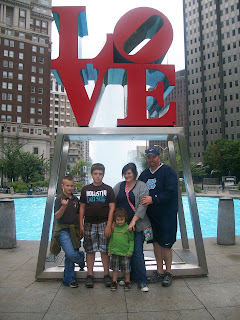 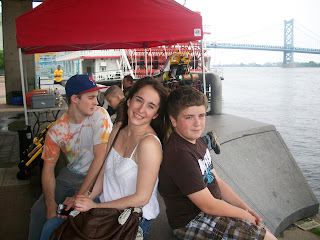 we saw the Liberty Bell....which I always thought was so much bigger but its actually rather small. 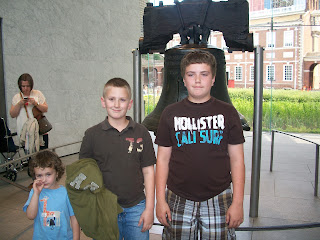 But the best part of the whole day (other than just being with my family and niece) was when we went to a craft bazaar at Penn's Landing. As we were walking around I noticed a tent that said "Jay McCarrol" (who was on project runway...my all time favorite show!) and I said to my husband "oh look they are selling his stuff here" then I looked again and guess what????
HE WAS THERE!!!!!!
I so had to get my picture taken with him. 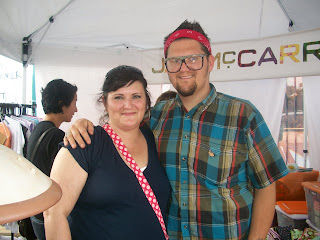 But......the best part is as we were getting our pic taken we were talking about his fabrics (you know...me embarrassingly gushing about how I loved them) when he asked me if I sewed. I said yes and he picked up my BumbleBee Bag and said " This is cool....its sewn really well!!!!!!!!!!!!" OMG!!!!!!! I was in heaven....a man I admire so much for his visionary designs and amazing talent telling me I sew well! It was a perfect day!!
Posted by BumbleBee Bagz at 5:27 AM

Welcome to my blog...a crazy modpodge of my designs and thoughts and insane opinions! Also a show place of my bag designs.

If you would like a custom bag please email me or find me on facebook here. My website is currently down as I am trying to restock for the upcoming holiday season!